Setup for optogenetics and patch-clamp

The optogenetics is a novel approach for management of key biological processes on the level of cells, neural networks and even animals. Optogenetics was awarded the honorary title “Method of year” by the Nature magazine in 2010. In brief, the method concept is the following. Photosensitive proteins are introduced to the cell by genetic engineering methods for neurons to be able to transmit electric pulses under illumination. As a result, real-time control of neuron activity could be reached due to simple lighting by a lamp of a certain wavelength.

System for optogenetic studies and a visualized patch-clamp installed in Laboratory for Advanced Research of Membrane Proteins, MIPT in the end of 2015 year. It is a powerful, integrated system for different applications. It allows photostimulation and photomodification (uncaging), optogenetic studies with simultaneous patch-clamp control of the cell potential, and signal transmission through the neural network.

Photostimulation causes change of cell membrane potential. Electrical response to the illumination is detected by the electrophysiological module of the system. Digidata 1550A1 (Axon Instruments, Molecular Devices, USA) generates electrical pulses of different sequences guided by user’s configuration, serves as DAC/ADC, transmits control signal to the MultiClamp 700B (Axon Instruments, Molecular Devices, USA) and finally to the neuron. Then, the cell electrical response, received by MultiClamp 700B, goes to Digidata 1550A1, which suppresses noises and sends signals to the PC.

Setup for optogenetics and patch-clamp is used at MIPT for the search of novel photosensitive proteins, controlling transport of certain important ions. Such proteins will expand the arsenal of optogenetic tools and thereby facilitate scientific and pharmacological research in the field of neurodegenerative diseases. 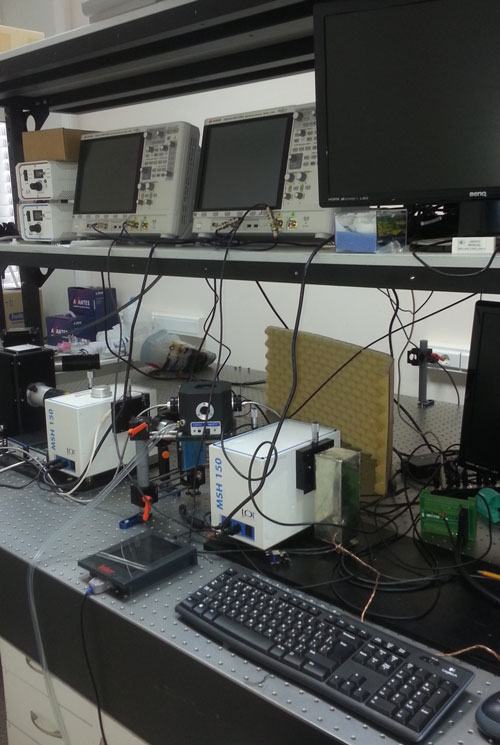 The Laser Flash Photolysis technique provides one of the most effective methods for studying by direct measurement the reactions of transient species such as radicals, excited states or ions, in chemical and biological systems generated by a short intense light pulse from a pulsed laser source (‘pump source’). The use of a laser for sample excitation gives the technique the specificity of single wavelength excitation and nanosecond time resolution. This intense light pulse creates short lived photo-excited intermediates - excited states. Absorption changes are recorded using a spectrally continuous Xenon lamp (‘probe source’) forming the background in a single beam absorption spectrometer.

Finding wide application in chemical research, Laser flash photolysis has been used increasingly in the area of bioinorganic reaction mechanisms, for example, studies on electron transport in cytochromes or ligand binding. More exotic applications involving the Laser Flash Photolysis technique have recently included studies on the conformational changes of functional proteins that occur during the course of their activity.

Lecture Course "Basics and beyond: building blocks, structure and function of biological membranes"

Structural insights into ligand recognition and activation of angiotensin receptors

NanoFAST: structure-based design of a small fluorogen-activating protein with only 98 amino acids